For me, a solo is a blank space waiting to be filled — nothing but amorphous potential. There are many ways to fill this space, many tools I could use.  Most of us tend to stuff it as full as possible. As the years pass, I find more and more pleasure in playing with the texture of this filling. In addition, it is imperative to communicate with the audience. This communication is the greatest force in helping me find the poetic voice of each piece.. 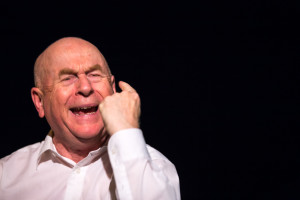 Andrew Morrish began to work with improvisation with Al Wunder in Melbourne, Australia in 1981.He was a founding member of Al’s “Theatre and the Ordinary” and subsequently formed “Trotman and Morrish” (with Peter Trotman) in 1987. They then performed  as a duet in Australia and the U.S. until 1999. Since 2000 he has primarily focused on teaching and performing solo improvisation in Australia and Europe, whilst still maintaining ongoing duet practices with Peter and Sten Rudstrom. www.andrewmorrish.com