The Musical Pie Continuous Works – the ongoing adventures into the spaces between playing an instrument, dancing and other performative behaviors. A song is not a line, it has depth, a landscape that moves and reforms at every point on that line. A song is only the surface. Below is the territory of the Musical Pie Kino. 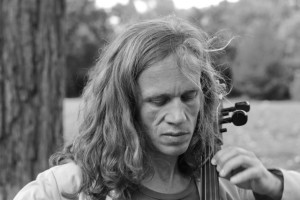 Barnaby has for the last 30 years developed solo and collaborative work in experimental performance, dance and music. He is a musician (cello, piano) and singer trained in the physical disciplines of improvised performance practices. He has produced 5 albums, most recently “In my brain you are furry”with Pebble Music and composes music for film. Tree has performed at improvisation festivals  and worked with performance companies all over Europe.  He is based in Berlin and will be teaching ” The Singing Ship ‘ a vocal workshop on May 19th. In 2015 he began a weekly solo performance open to 1 to 11 people as part of the ongoing project ”The Musical Pie Kino.” A project to combine self-care, improvisation and poetry.
www.barnabytree.com