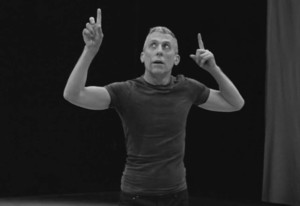 Peter Trotman has been described as the black prince of improvisers because the tales he weaves are often darkly gothic and embedded in powerful imaginative landscapes.  His unique physicality is heightened by his graphic verbal abilities and wry wit.  His interest in improvisational performance began with Al Wunder who taught for many years in Melbourne Australia.

He was one of Al’s first students in Australia and was also a member of Theatre of the Ordinary.  1982 saw the beginning of a very fruitful collaboration with Andrew Morrish as ‘Trotman and Morrish’.  Together they performed in Australia and the US to considerable acclaim and this period strongly shaped a lot of his ideas about improvisation, dance, language, and performance.

Through the years, his work has always been improvised, both the choreography and the text emerging in the present moment.  He enjoys working with the notion of revisiting what has previously emerged to find the elements required to give structure, associative depth, and emotional complexity to a performance.